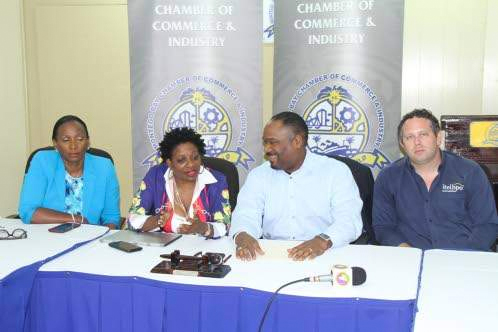 MONTEGO BAY, St James — The Montego Bay business community is fuming over the smoke nuisance being caused by a fire at the Retirement disposal site in St James.

In fact, members of the Montego Bay Chamber of Commerce and Industry (MBCCI) have flatly rejected Minister of Local Government Desmond McKenzie’s apology for the nuisance, which is causing great discomfort to residents in surrounding communities here.

“We have heard an apology from the honourable minister of local government… We are of the considered view that this is an inadequate response and indeed unacceptable,” MBCCI President Winston Lawson said yesterday.

On Tuesday, while addressing the opening ceremony for the inaugural Local Governance Conference Jamaica 2018 at the Jewel Grande Montego Bay Resort and Spa in Rose Hall, St James, McKenzie, who congratulated the National Solid Waste Management Authority (NSWMA) and the Jamaica Fire Brigade for their effort in bringing the fire under control, tendered an apology to residents who were affected by the smoke nuisance as a result of the dump fire.

“I have to take this opportunity, on behalf of the Government, to express to the residents of Montego Bay, to say how sorry we are for what has taken place. The Government, through the National Solid Waste Management Authority, has taken the necessary steps… including the Jamaica Fire Brigade, to bring the fire under control,” McKenzie expressed.

However, speaking at an impromptu press conference convened at the MBCCI Overton Plaza headquarters in Montego Bay, yesterday Lawson argued that it is unacceptable that the fire continues to rage at the dump site.

“One week after a fire erupted at the Retirement dump, the smoke is still engulfing the city of Montego Bay, causing immense discomfort and ill health to citizens who have been complaining of sore throat, asthmatic attacks, swollen eyes, and the taste of electricity on the tongue,” he said.