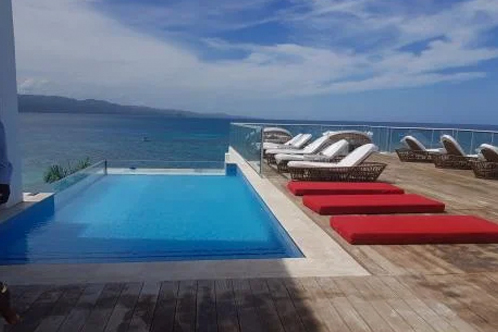 The Montego Bay Chamber of Commerce and Industry is upbeat about the expected positive impact of the soon-to-be opened 120-room S Hotel on the St James economy, and particularly the city’s tourism centre, the Gloucester Avenue hip strip.

The resort, which is set to open its doors officially by year end after repairs under its new owner, coincides with a revitalisation plan for Gloucester Avenue, which has been pinpointed as a prime location for investment in the establishment of Jamaican-owned and operated hotels that offer European plans or EP packages.

Unlike all-inclusive hotels that price and provide all services in one package deal food, entertainment, accommodation EP hotels tend to concentrate on accommodation and may include breakfast, which means that their guests tend to spend on services provided by local businesses outside the hotel property.

“We want specifically to commend the S Hotel for incorporating the EP model as we are all too familiar with the seamless spin-offs and benefits to the surrounding communities and attractions,” said Chamber president Winston Lawson. “We look forward to the imminent opening and our officially welcoming S Hotel to the business and general community of Montego Bay,” he said.

Renamed the Jimmy Cliff Boulevard, the hip strip now has three new and revamped properties lifting its image the Coral Cliff Gaming Lounge, the 2727 ganja cafe, and the S Hotel.

The ‘S’ name is a riff of the Spanish Court brand, which the Crissa Group operates. The hotel was initially expected to be called Spanish Court Montego Bay, in line with the other property of the same name located in New Kingston.

The hotel has been off the market for a decade, following its closure in 2009.

It was built by NCB Investments in 1995 and sold by joint owners NCB Staff Pension Fund and state-operated National Insurance Fund in 2011 to lawyer and hotelier Christopher Issa, owner of the Crissa Group.

Crissa reportedly paid US$7.5 million for the hotel and was expected to invest another US$12.5 million in the upgrade. But while Issa acknowledged on Thursday that there had been delays and overruns on the repairs, he said he would disclose the final investment figure.

General manager of the hotel, Lisa Gardner, said the finishing touches on the resort would be wrapped up in two weeks and that S would be ready to accommodate guests and open before the end of the year.

“We stayed away from the regular Spanish Court name because while it is our sister property, it is going to be a different concept in the sense that Spanish Court Kingston is more of a city, business kind of hotel,” said Gardner.

“We are hoping that for S Hotel Montego Bay, we will have leisure clients vacationing in Jamaica, hence our reason for differentiating the two,” she said.

Although the resort, which offers access to the world-famous Doctor’s Cave Beach, will offer EP packages, Gardner said clients would have the option of a meal plan if they want more of an all-inclusive kind of feel.

The rates charged by EP hotels do not usually include meals, and all food provided by the hotels is normally billed separately. Unlike many all-inclusive models, tips or gratuities are also additional.

Gardner said that as far as possible, the hotel had incorporated locally made materials in its architecture and its furnishings, including bedding, for which all of the mattresses were bought from Jamaican manufacturers.

The hotel features spa suites, lounges, and a private pool for the fifth and sixth floors, a sky deck and pool bar, and it has three restaurants one specialising in · la carte, the other buffet, and a poolside grill which are complemented by an exclusive Thai deck eatery and bar.