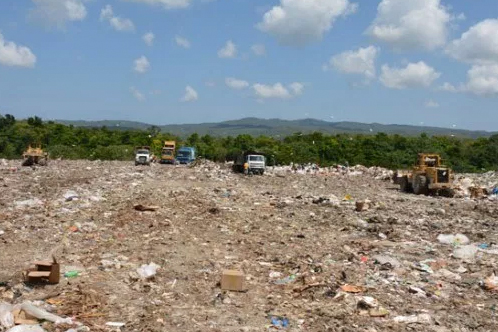 President of the Montego Bay Chamber of Commerce, Wwinston Lawson says the apology from Local Government Minister Desmond McKenzie over noxious fumes emanating from the Retirement dump fire, is inadequate and unacceptable.

On Tuesday, Mr. McKenzie apologized to the people of St. James for the smoke that has been affecting them as a result of the fire.

However, less than 24 hours after that apology, Mr. Lawson said the Montego Bay business community has not taken kindly to the expression of regret.

Lawson argued that while an apology is the right thing to do, the situation needs more action to stem and correct the problems.

He says the smoke is unbearable and is affecting productivity.

In the meantime, the business community has urged the Office of Disaster Preparedness and Emergency Management (Odpem) to intervene as it relates to the on-going smoke nuisance.

Speaking at a press conference this morning (Jul 19) Mr. Lawson said one week after the fire at the dump, smoke is still engulfing Montego Bay.

He says the smoke is causing discomfort and ill-health to citizens, who have been complaining of sore throat, asthma attacks, swollen eyes among other effects.

Lawson says he wants Odpem to urgently examine the situation and provide assistance to remedy it.

The Chamber of Commerce President says at least one member is considering moving out of Montego Bay until the situation is resolved.

The National Solid Waste Management Authority (Nswma) said in a release today, that it anticipates that the smoke will dissipate by Sunday, as 75 per cent of the affected areas have been covered with smoke suppressant materials.

In the meantime, there is a call for Minister of Local Government, Desmond McKenzie, to relocate the retirement dump.

The call has come from the Granville Peace and Justice Resource Development Foundation, which is of the view that the dump poses serious threats to the health and well-being of residents of Granville and neighbouring communities.

Executive Director of the Foundation, Dave Allen, says over the past several days the dump has blanketed neighbouring communities with unhealthy and noxious fumes.